Mac Studio Review – Even The Base Model is Great!

I’ve been working on formulating my Max Studio review for a couple of weeks, and I’ve finally been able to spend enough time with the machine to share my thoughts about Apple’s most powerful desktop offering. Now I’ve had the opportunity to test both the high-end mac studio, with the M1 Ultra system on a chip along with the entry-level M1 Max Base model. M1 Max Base model is the Mac Studio that will be a worthwhile purchase for those looking for a desktop solution. 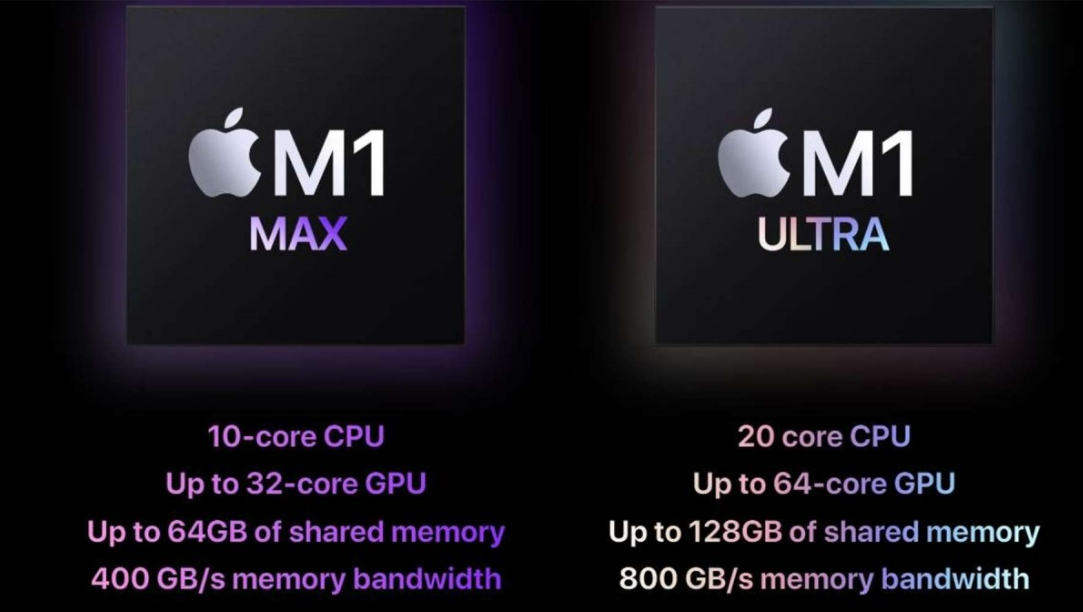 Should you splurge for the M1 Ultra? Well now let me share my observations and findings with You! In terms of design, the Mac Studio is pretty much the definition of an overcorrection. Its beefy chassis which is nearly the size of three Mac Mini’s stacked on top of each other is neither pretty nor elegant. Contrary to past approaches Apple designed the computer by first determining what users needed, in terms of performance and capability. 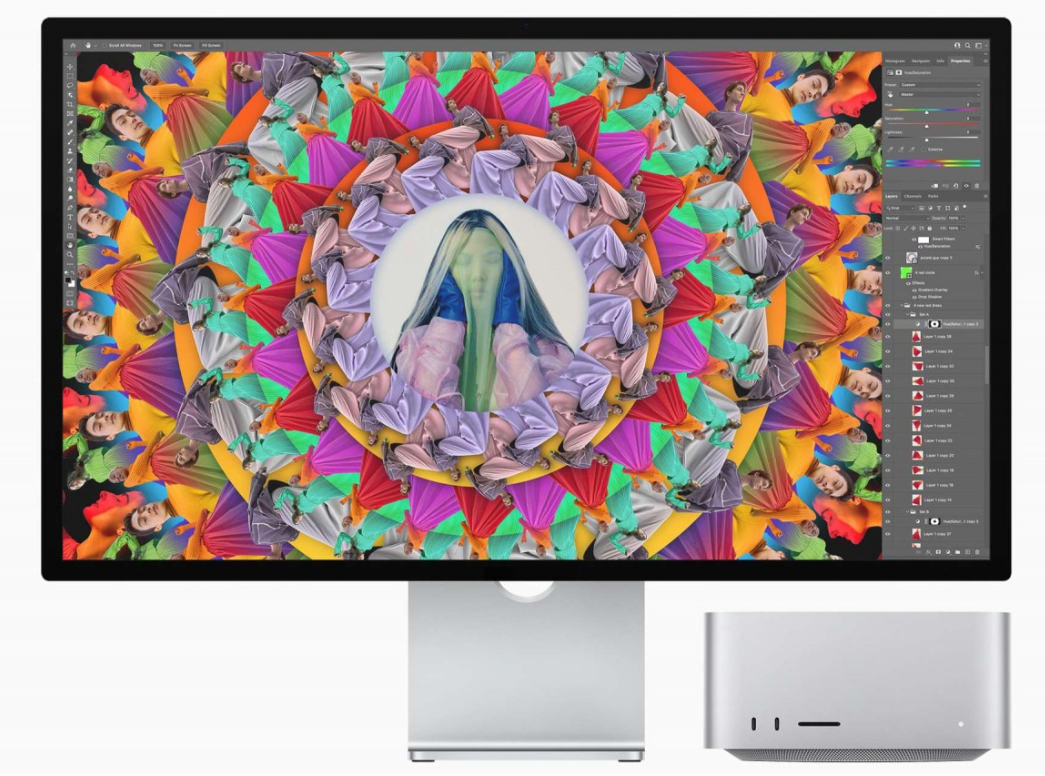 Sculpted the machine around those parameters, the Mac Studio isn’t an ugly machine but it’s a clear departure from Johnny i’s vision of what a desktop computer should look like. Frankly, that’s a breath of fresh air! That’s not to say that the Max Studio doesn’t have its thoughtfully designed areas either. For example, the unit is just short enough so that it fits safely underneath Apple’s newly launched 27 27-inch studio display.

It also features a beautifully designed intake and exhaust system. And while the Mac Studio isn’t dead silent, it’s quiet enough to where you’ll need to put forth some effort to hear it, even when it’s under considerable load. Outside of the Mac Pro, the Mac Studio is the only computer that Apple makes with more than four USB-C ports. 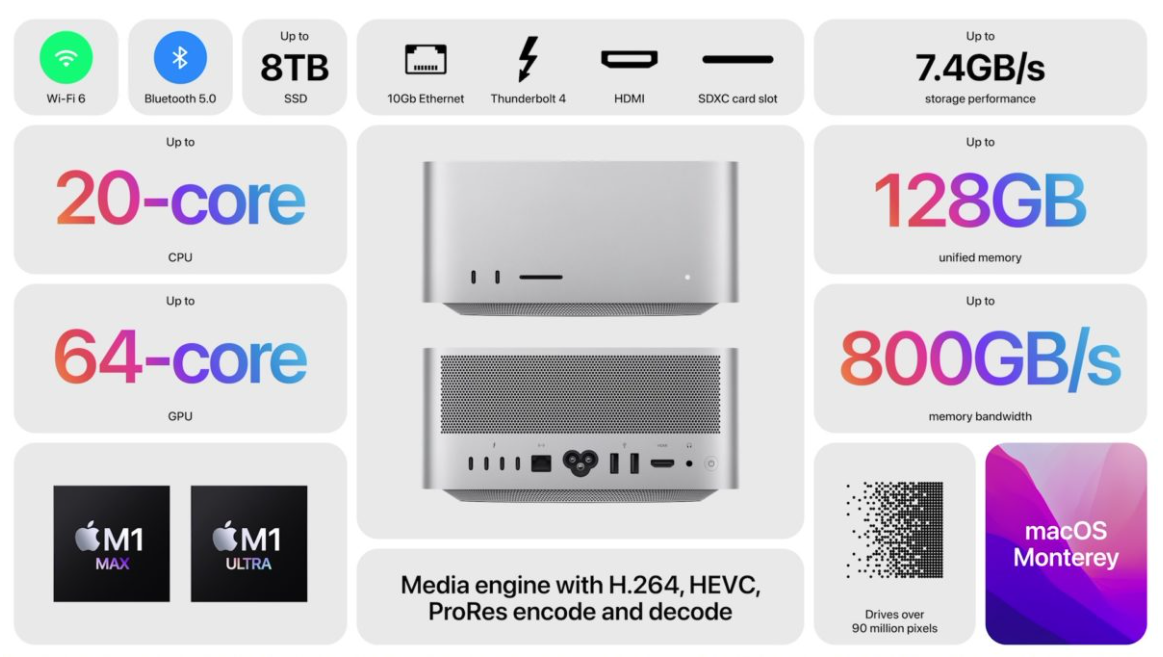 On the M1 Ultra version of the machine, all of the USB-C ports are Thunderbolt 4 ports which prove to be extremely handy for someone like me, who is steeped knee-deep in the Thunderbolt ecosystem. The cheaper M1 Max enabled Max Studios to lack the necessary bandwidth to have six Thunderbolt ports relegating the front two ports to 10 gigabits per second USB 3.1 Gen 2 ports instead.

That’s a little bit disappointing, but for the majority of people 4 Thunderbolts 4 ports plus 2 USB 3.1 ports provide more than enough USB-C IO. next to the two-front-facing USB-C ports is a UH S2 enabled SDXC card slot. This is a perfect addition for those who regularly offload photos and videos from digital cameras. Although SD cards aren’t nearly as fast as something like CF express, which is a storage medium that many modern cameras are starting to use, SD cards remain far more prevalent.

Lately, some of the newest cameras capture 8K video support, shooting directly to an SD card. I’ve recently been testing out Canon’s R5C Hybrid mirrorless camera and it features an updated HEVC Codec, that has a very reasonable 540 megabits per second data rate. Such a data rate happens to be perfect for V90 SD cards. In fact card manufacturer Wise just announced a V90 offering that maxes out at 512 gigabytes. That is the largest such yet and one capable of storing up to two hours of 8K video captured with the R5C.

Now you wouldn’t be crazy to think that you were looking at the back of an intel Mac Mini when looking at the rear of the Mac Studio. Because outside of the arrangement of the ports, the type of IO is pretty similar. Max Studio features four Thunderbolt 4 slash USB 4 ports on the rear a 10 gigabit Ethernet port, two USB ports, an HDMI 2.0 port, and a 3.5-millimeter headphone output. But unlike the Mac Mini 10-gigabit ethernet comes standard on all Mac Studio machines.

That’s great for connecting to things like NAS boxes or even something like Blackmagic design’s newly introduced cloud store box. While it’s not as fast as Thunderbolt 10-gigabit ethernet, is a lot more flexible! it can travel over longer distances and whole networks can be designed around it. In my case, I have my Mac Studio connected to a 10-gigabit Ethernet switch a Synology NAS with a 10-gigabit ethernet card, and a 5 gigabit per second att fiber internet connection.

What’s great is that all these network components reside in another area of the house away from my office. Meaning that I don’t have to worry about the noise emanating from the Synology NAS when a time machine backup decides to run for instance. Of course, I can’t forget to mention one of the biggest IO benefits of the mac studio when compared to M1-based machines. The M1 Mac Mini for instance supported just one Thunderbolt display up to 6K resolution, while the Mac Studio supports four 6K Pro display XDRS or 5K studio displays. Simultaneously the Mac Studio supports five displays at once.

If ‘you also count its ability to connect to a 4K display via HDMI, it’s pretty impressive! Talking about performance, I’ve tested both the base model Max Studio and a much beefier M1 Ultra model, featuring a 20-core CPU 64 core GPU 128 gigabytes of unified memory, and one terabyte SSD. I have lots of thoughts about both of these machines but one of the talking points you’ll likely hear around the tech world is, how the M1 Ultra is a relatively bad value. This talking point rings roughly true in some areas. For example, 95 max miles Somerville put both machines to the test for video editing and then found that, while the m1 ultra yielded slightly better export and render times in final cut Pro.

The differences for his workflows weren’t nearly commensurate to the $2000 plus price difference. But here’s where it gets interesting! Anything different needs and different workflows will determine whether or not you should upgrade any of the build-to-order parts when configuring a Mac studio. Here are my main observations after testing these two machines back to back spoken primarily from a video editor’s perspective, but also touching on other areas.

First and foremost, I’m really glad that Apple opted to give users 32 gigabytes of unified memory. As a starting point, 16 gigabytes is just not enough memory for a desktop computer these days. You’ll quickly start running out of memory and swapping out to a much lower SSD with just a few apps open. And if you edit video especially higher resolution 6K or 8K workflows you’ll start swapping out to disk as soon as you open some final cut projects. It’s ridiculous so 32 gigabytes is a very good thing. With all that being said, I believe 64 gigabytes of unified memory is the sweet spot if you can afford the up charge and can wait weeks or perhaps months due to backorders on build-to-order configs.

I’ve long noted that storage is the only thing on modern Apple computers that’s “upgradeable”. Because of the existence of Thunderbolt connectivity in the past, I was quick to dismiss internal storage upgrades due to how costly they were when compared to mid-tier external media. But depending on the type of work you do. Internal storage upgrades are an area that should not be overlooked on Apple silicon, if you’re regularly working with huge files think 3D rendering high-resolution video editing etc.

Then you might consider upgrading internal storage if you can afford it. I don’t think most people truly appreciate how utterly fast Apple’s Internal Storage is and how much of an impact it can have on overall system performance when working with large swaths of data. Not only does a larger SSD help from the perspective of just being able to store more files, but the drive gets faster as the size increases as well.

At any rate, the speed of Apple’s internal storage will more times than not run circles around external media. Even most Thunderbolt sends won’t be able to compete, unless you delve into some of the expensive NVMe-based RAID setups. Comparatively, Apple’s $2400 asking price for its top-end 8 terabyte SSD is fairly competitive. If you haven’t noticed, the machines that Apple uses to benchmark the Mac Studio’s ability to handle multiple streams of 8K ProRes video feature 8 terabytes of spec-out storage.

I don’t believe that this is a coincidence because brutally fast storage, is essential when you’re moving over a dozen and a half streams of 8K video at the same time. Apple notes that the Mac Studio configured with the M1 Ultra can play back an insane 18 streams of 8K prores 422 videos at the same time. Although my Mac Studio has the necessary CPU and GPU credentials the one terabyte of storage seemed to serve as a bottleneck, causing the last four streams of aK video to drop frames on playback below real-time levels in my testing.

This 32-core neural engine will be able to execute operations like motion tracking and new voice isolation features in Final Cut Pro even faster. But I’m kind of living in a bubble here. The Mac Studio wasn’t just made for video. Applications Developers will benefit from reduced compile times, made possible by that 20-core CPU in the M1 Ultra, while training ml models using platforms like TensorFlow stand to benefit from the additional GPU cores as well.

Although these are far from my areas of expertise, I was able to see tangible benefits when running tests across both disciplines. Assuming your work translates to Apple silicon, the following people should consider purchasing the Mac Studio :

Even the Base Max Studio is a great overall computer and such a massive step up. Its usability is far beyond any M1 Mac that Apple sells. It features way more Io than any other of the apple silicone-powered laptops or desktop options. It runs quieter than any of the company’s laptops and it features relatively generous specs for the 1999 Base model.

One of the main downsides of the Mac Studio is when it comes to Mac Mini, you’ll need to own a display that pairs perfectly with Apple’s new 27-inch studio display. You may consider the M1 Pro 14-inch MacBook Pro which is a very capable laptop that features a screen outside of the size that is better than a Studio Display in several tangible ways.

Either that or wait for the cheaper M2-powered Mac Mini arriving later this year, that should have more IO as well. And of course, more power! now whereas the Mac Mini serves as more of a niche product, the Mac Studio is extremely usable on pretty much all fronts. Just add a display keyboard or mouse and you’re good to go. I just wish it came in black because it will look a lot less awkward that way in my opinion. What do you think about the Mac Studio? Have you purchased one or plan on purchasing one? sound off down below in the comments with your thought!

Apple AirTags – How to Change the Battery