Just one week ago we’ve seen the biggest change the iPhones have seen since 2017. Apple has introduced a whole lineup of phones, some of which are very exciting, and others – rather controversial. This lineup represents Apple’s vision of the future, but do we look in the same direction? Did Apple manage to guess what we want and supply enough innovations so we could run to the stores and empty our pockets? Let’s take a look at all smartphones unveiled at the September event and answer the question – which iPhone is worth buying and which one is a waste of money? It’s not as obvious as it seems… For the start, let’s make a short recap of everything we know so far. So let’s start with iPhone 14 and 14 Plus. The same body as the last year’s iPhone 13 yet in two sizes, same display parameters, again, in two sizes, 6.1 inches, and 6.7 inches. Oh wait, were you a fan of small, miniature phones like the iPhone mini? Sorry pal, now you can’t get the best phone in the smallest package. Oh, the specs, right? Even the processors are the same, almost.

Now A15 has 5 GPU cores which makes almost no difference for a regular person. Is there anything new? Or regular iPhone 14 and 14 Plus is just the same old iPhone 13 with no changes whatsoever? Oh, wait, not the 13, but the iPhone 12. This design comes from the 12 series which was released back in 2020 and hasn’t changed much since. The cameras are also unchanged. It’s too hard to justify purchasing this phone when the iPhone 13 can be picked up much cheaper. But okay, let’s look deeper. Maybe there are more changes under the hood than meets the eye. The sim card tray is now gone, only eSim in the USA. Satellite connectivity and Crash Detection are nice features, but I don’t see anyone using them often enough. It’s good to have them, but the chance that you’ll use them is minuscule. Are you planning on getting lost? How often do you even go to places where you can get lost without a signal? This feature won’t work in shopping malls, so there’s no point in it for a regular consumer. Sorry, I’m getting carried away with my assumptions.

MUST READ: iPhone 14 Pro Max – The Coolest Notch on Any Phone

Let’s switch to iPhone 14 Pro models and examine them closer. That’s where we see changes, that’s what is truly a new iPhone! So many things, where should I start? The screen is probably the only thing that will inform people that you’re holding the newest iPhone. Screen sizes both for iPhone 14 Pro and iPhone 14 Pro Max did not change in terms of numbers, but  Apple claims the borders got thinner. The notch is now gone. Finally, it’s been so long! Finally, this redundancy has been ditched, at least in Pro models. Now all sensors are housed inside a small cutout, which is integrated rather beautifully. Apple’s calling it Dynamic Island.

Apple is still Apple, they need to name everything. Essentially, the cutout is interactive and works as a part of the interface. It changes shapes, forms, and sizes, depending on the occasion. Thanks to the LTPO display, individual pixels can be turned off which makes this feature possible. I think this is a great way to deal with the notch. Apple in its way takes something that’s considered a disadvantage and turns it into a unique feature. Additionally, the screen now supports a proper Always-On mode. It’s done, again, in a very clever and unusual way. Instead of showing small widgets on the fully black screen, the new iPhones Pro only dims everything and turns the refresh rate all the way down to 1 Hertz. This way it works just like on the Apple Watch – the beauty is preserved without sacrificing the battery life. New Pro iPhones received a new A16 Bionic chip which now uses a 4-nanometer technology. It should have 15% better performance and be more power-efficient. But performance gains are boring, we’re already used to them. 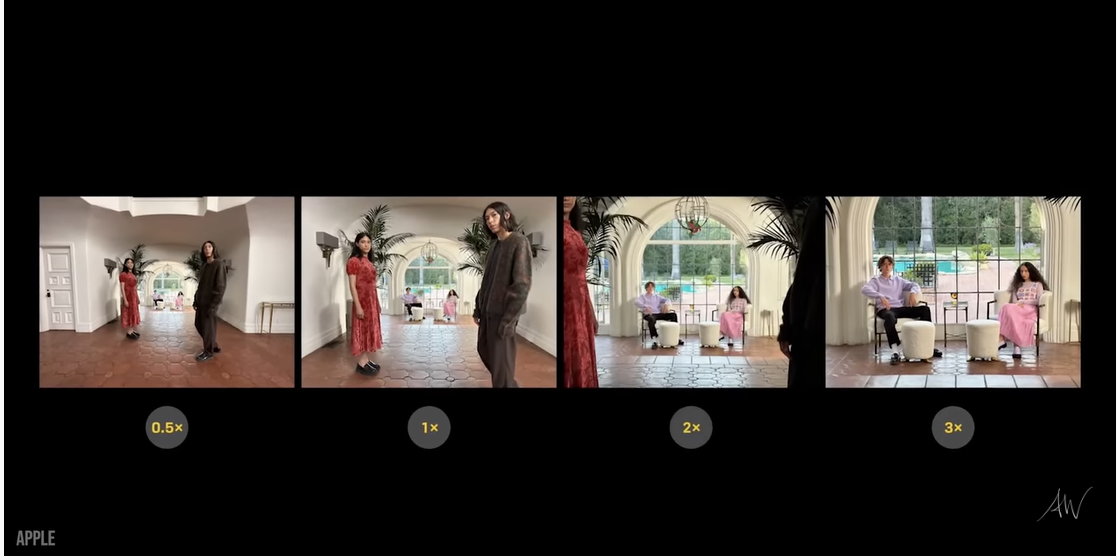 Let’s talk about Cameras! The main change we see is in the manned module. Now it’s a 48 Mpix sensor that captures more light and produces much sharper, clearer images. Its resolution makes possible 2x zoom without losing the quality. That zoom is not optical and is achieved by cropping the photo, but nonetheless. Wide-angle and telephoto cameras are still 12 Mpix but have bigger apertures which should dramatically improve low-light photos. Paired with Photonic Engine these cameras will become the best pals for any photographer. That’s a serious upgrade and I don’t even have anything else to say. Okay, okay, let’s compare. I know there are many features to discuss, but let’s look at them through the prism of an actual comparison.

MUST READ!!! The So Called iPhone 14’s Dynamic Island

That’s why you’re here, right? So… The iPhone 14 Pro and Pro Max are significantly better than the regular iPhone 14. Their screen is two times brighter, has “Always-On”, and features Dynamic Island. This should change the way you interact with your phone, and add new sensations to the familiar actions. Additionally, Pro models have a higher refresh rate, 120 Hertz instead of 60. Trust me, this is visible! Pro screens are so smooth, so if you haven’t tried them yet – this may be the moment you switch. Also, the absence of that notch is a bonus. When it comes to performance – Pro models are winning again. Their A16 Bionic chip will wipe the floor with A15 found in a regular iPhone 14.

This performance gap shouldn’t be very noticeable for most users, so think the A15 is good enough for you. Let’s hope Apple has done something to improve the heat situation because throttling was a real problem in all A15-powered iPhones. I can’t deny that Pro models are faster and more powerful, but who needs that power? I can’t imagine the scenario where the iPhone can be bottlenecked by its performance. We can’t mine crypto on iPhones, so comparing them in performance isn’t the real case. The differences between these models become apparent when you think of cameras. Whilst the regular 14 adopts the cameras from 13 Pro, the new iPhone 14 Pro and Pro max have a completely new camera system. All sensors were updated and now gather more light. The main sensor has a much bigger resolution, so if you’re after good, crisp photos – the Pro models are the ones to buy. I can’t say that every person needs these megapixels since the photos taken on the iPhone 11 still look great even today, three years later. But let’s assume that you need all that potential.

If you are planning on shooting a lot and every small improvement influences your life – that’s the only scenario when I can root for Pro models. I do not use zoom that often, I don’t crop the images significantly, and I don’t shoot low-light portraits daily to notice a Lidar presence. But The reason for that is not my leisure, but the lightning port. That’s the same reason why I don’t shoot DolbyVision and ProRes videos on my iPhone. Do you imagine how long it takes to transfer such a video via AirDrop? Ages! But let’s leave that for later and dedicate a few words to video recording. That’s where the difference between Pro and non-pro models disappears. All new phones have super-stabilized Action mode for better stabilization of dynamic movies, and all of them shoot Cinematic videos at 4K. You may say – what about that telephoto lens? And I’ll answer – how often do you even use it? Despite being a welcomed addition, a telephoto lens is used the least among all lenses. So why pay more for something you won’t use? Believe me – all phones will be great for shooting videos if you’re up for it. 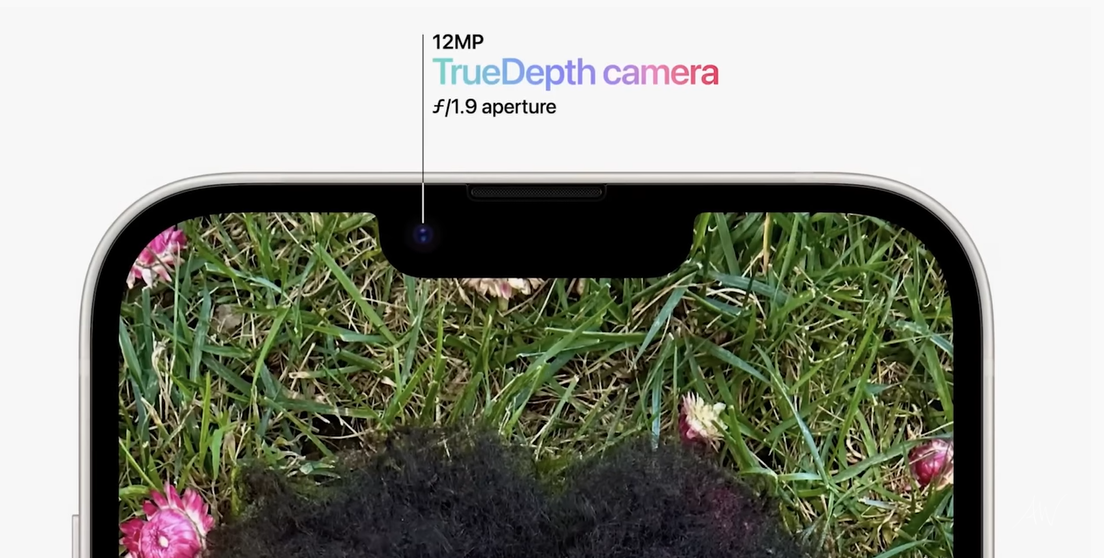 If you’re a blogger and a selfie camera does matter to you then there again are no differences. All iPhones have a 12 Mpix sensor with autofocus. They are identical in regular and Pro iPhones 14. Those videos will be equally great, believe me. All four phones have satellite connectivity and car crash detection, but I’ve covered that earlier. Good features but are not worth extra money. If your carrier provides an update – great. But if you’re considering putting out your own money for a new phone just for this feature – don’t do it! Now let’s talk about Battery life and charging. This aspect has always been a pain in the neck for all iPhone users, am I right? The situation got better in the last few years, but we remember. As they say “the North remembers.” How did a Game of Thrones reference slip through? Jokes aside – the batteries got slightly bigger, and if you trust the info on Apple’s website, all models are a tiny bit better in terms of battery life than their predecessors. Even if they hold the charge a few minutes longer, their charging is still slow, especially when compared to Android flagships.

Those guys are charging at 100 watts, while iPhones are struggling to reach 27. But let’s not dwell on that. All modern iPhones are great in terms of battery life, so if you’re satisfied with your current iPhone, you will not be disappointed with the newest ones. Of course, the Pro Max model has the largest battery ever in an iPhone, which will surely make it a new battery life king. So, what to choose? Which one suits you best? If you have an older iPhone, you’re short on cash, and you want the latest iPhone – then the regular iPhone 14 is your number-two choice. Because last year’s iPhone 13 should be the number one. You will pay less for the 13 and notice next to no difference. If you’re taking many photos, videos, and you want to be on the edge of technical progress – that’s when the iPhone 14 Pro steps in. All its features in a relatively compact form factor should be enough for most people. But if you’re planning on going into the woods for two or three days to shoot videos and photos – that’s when the Pro Max will shine. It will hold the charge for all that time and save you in case you get lost thanks to satellite connectivity. With all that said, I guess we can safely assume that the iPhone 14 Pro is the best phone of this year. It gets my recommendation, and it will most likely be my next phone!

M2 MacBook Air / Pro — How much RAM do you ACTUALLY need?