Everyday Mac Software You MUST DELETE!!!

Do you remember the first weeks of using your MacBook? You treat it as your baby, download ONLY the things you need… But a few weeks later the situation is getting out of control and you end up with a messy laptop, and apps you rarely use. SOME APPS might hurt your MacBook, and you should delete it RIGHT NOW. Only this way your MacBook will work as a new one and last you for years!

Guess which app collects user data in secret from you, particularly, your data, and sends stats to servers every 12 hours. At first glance, it’s innocent and like a bro… but no! And I’m talking about CCleaner. Moreover, Piriform and Avast, who own this application, have the right to sell the collected information to third parties, which is stated in the license agreement. Just go to the official CCleaner website, there is a photo analysis feature, which automatically removes bad photos. And this is not safe, because with a possible developer’s hacking attack, those bad photos, or even personal and secret photos, can get leaked into the network. Did I say “a possible hacking attack”? It has already happened. So, in 2017, hackers attacked the program and moved a couple of serious viruses into its installer — Trojan. Floxif and Trojan.Nyetya. Plus, we get news that CCleaner is infected with a virus and steals user data.

There is a report from Cisco Talos: the developers confirmed that there was indeed a virus in the CCleaner version. 3% of computers have been infected with it, which is 2.27 million people. And look at this: early versions of the app were launched only at the user’s request. Well, now it works in the background by default, eating up extra RAM, not forgetting to report on your activities to the company’s servers.

CCleaner is not the only app that is not only a thief but also a hack in one person. Surely you’ve heard about it, and if not, then get to know MacKeeper. At one time they aggressively promoted this budget cleaner and accelerator of your Mac, which, of course, attracted attention. And indeed: as soon as you install MacKeeper on your Mac, it launches the promised scan, and immediately finds dozens of problems that need to be solved – vulnerabilities, viruses, gigabytes of garbage, and so on. But they did the trick – the program stole users’ data. Back in 2015, security expert Chris Vickery found a database with logins, passwords, license numbers, and IP addresses of 13 million MacKeeper users. The vulnerability, of course, was eliminated, but it turned out that MacKeeper stored data on a public server. And guys, stop using applications that have the word Toolbar in their title! Yes, they are designed to organize shortcuts and folders on your desktop and make the interface more convenient and simpler, but macOS is already nowhere more convenient. Do not forget that the best UI/UX designers are working on it, the user interface has been improving for years, and every pixel is in its place. Just pull yourself together and get rid of the junk on your desktop. 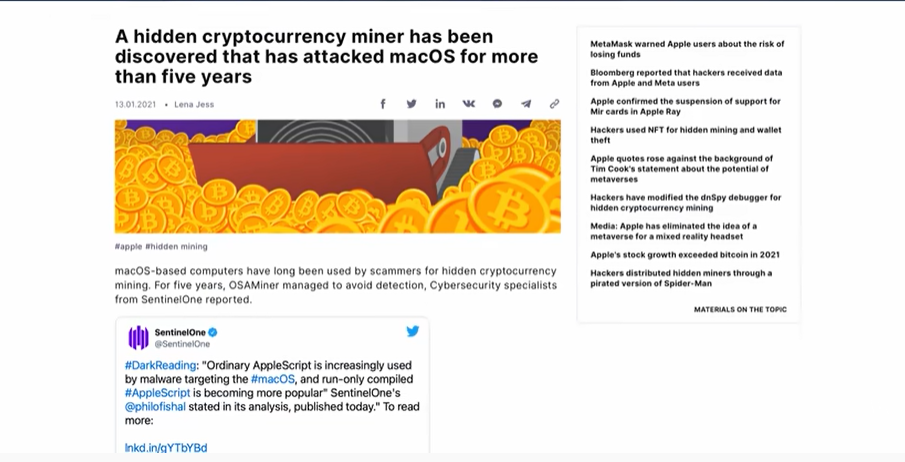 Smash the like button if you didn’t know that macOS-based computers have been used by scammers for hidden cryptocurrency mining. And yes, it came from where we weren’t expecting. For five years, the OSAMiner malware managed to avoid detection, reported cybersecurity experts from SentinelOne. For five years! And this thing spread through hacked games and other apps, including League of Legends and Microsoft Office for Mac. According to the researchers, OSAMiner is mainly focused on China and the Asia-Pacific region.

And check this out: experts from China couldn’t get the full OSAMiner code to study, since the program extracts it at different stages using AppleScript files nested in each other, intended only for execution. The final run-only script was loaded already in compiled form. This code is unreadable to humans. We can only live with this information because the main sign that the miner program has penetrated the Mac and reads hashes for cryptocurrency mining is a decrease in the speed of a computer and an increase in energy consumption. A good antivirus will detect the threat and block the malware or reset the connection to a site whose page has a built-in miner.

ALSO READ: M2 MacBook Air vs M1 MacBook Air: Which One Should You Buy?

But this doesn’t always happen. So even if you are 100% sure, it’s better to check the system manually. In the Activity Monitor, open the CPU tab and select the tasks depending on the CPU load. The malware will be among the first, consuming a huge share of the processor power and battery power of a Macbook or iMac. Browser extensions – gives us a bunch of new features. Some of them are useful but some of them are bad that might cause much more harm than help. Hola is an extremely popular extension for unlocking content that is not available in your region. However, unlike a regular VPN, Hola acts as a peer-to-peer proxy network. This means that everyone who uses Hola is actually “borrowing” another user’s connection. But the trick was that Hola was used as a giant botnet system. If another user gained access to your connection via the network and gained access to illegal materials, this can lead to some troubles, not to mention the confidentiality of your data. 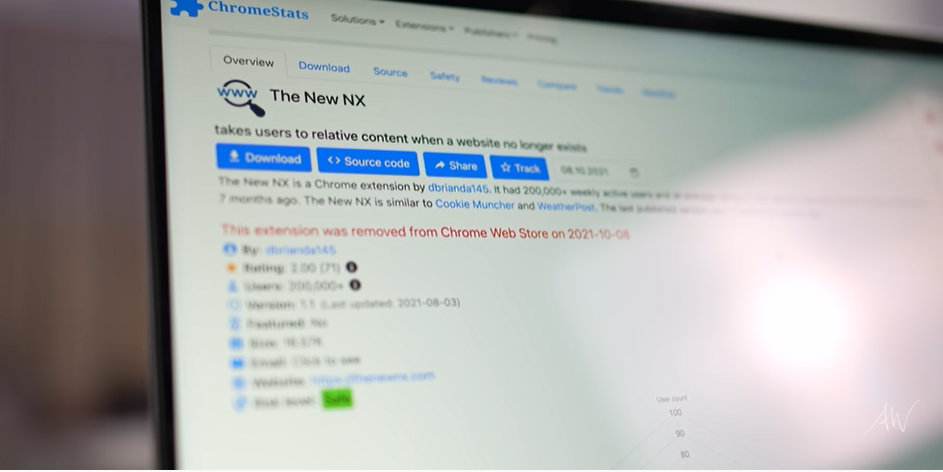 In the middle of 2021, an extension called The New NX appeared, which immediately began to receive a lot of negative reviews, which seems to speak for itself. The Chrome online store also agrees with this, which shows as many as a few red flags. But since there are overly trusting people, then I must give an extra warning. In the description, it says that this “leads users to relative content when the website no longer exists” That’s a big statement. But in all the reviews we see accusations of fraud. It seems that when using a certain downloader website, you are prompted to install this extension, which then leads to malicious behavior.

Fortunately, many dangerous Chrome extensions have been removed from the Chrome store. One example is mouse-over zooming – it started as a useful tool for enlarging images when you hover the mouse cursor over them. Unfortunately, a simple feature was bought by a malicious company that turned the extension into spyware, tracking and selling your browsing data. Hover Zoom is no longer available in the online store, but I decided to include it in the list because of its popularity. So if you still have it, then delete it, and install a safe version… guess what it’s called, that’s right: Hover Zoom+. It’s the successor to the open-source original and is safe to use. 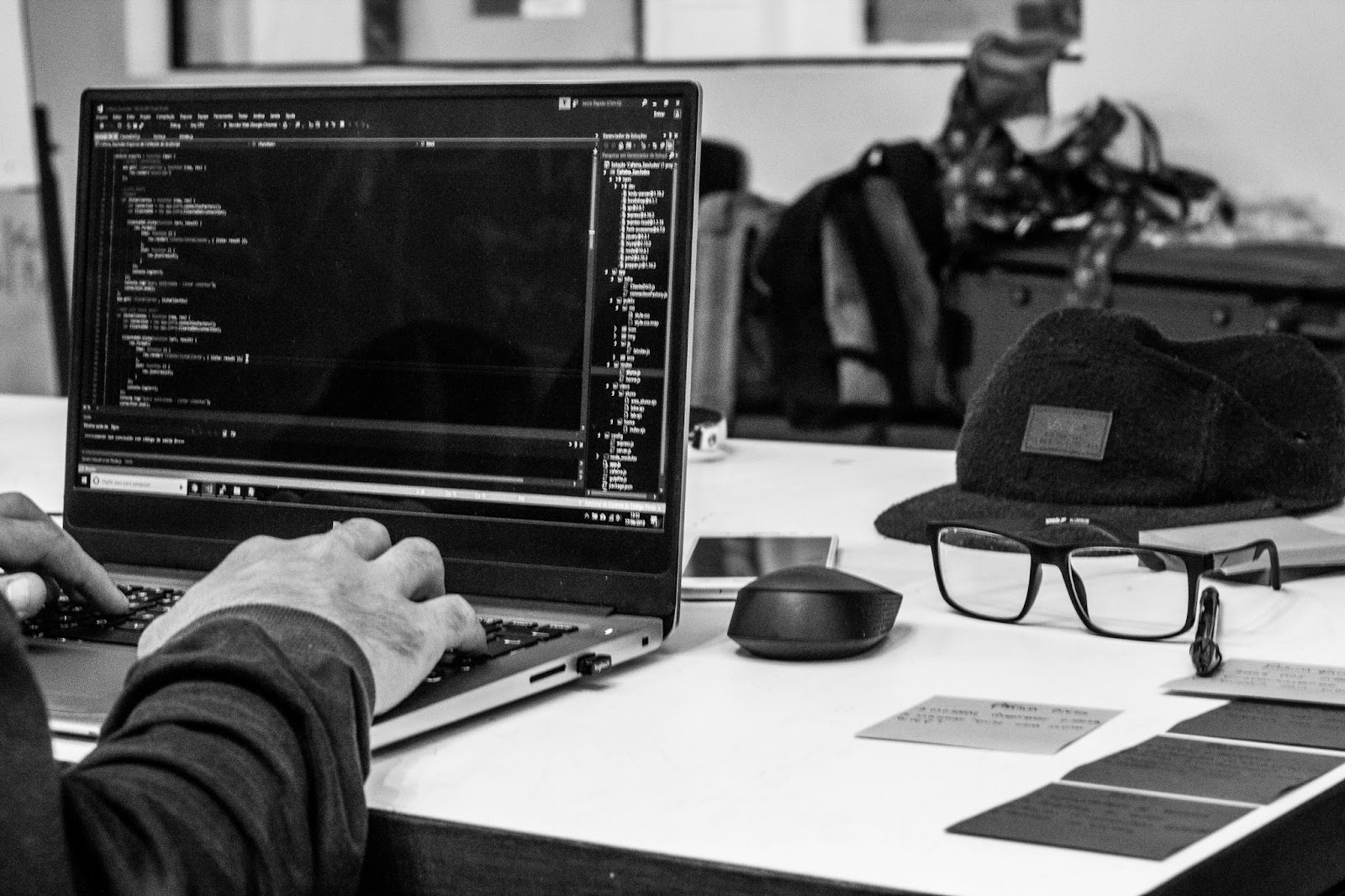 You can find hacked apps on the web and use paid versions for free. They should be treated very carefully and used only at your own risk. But if you decide to do it, then keep in mind that it’s not the application itself or the extension that can harm the system, but a bad build – while a similar licensed product will work perfectly. But more importantly, there are cases when hackers disguise software as a virus, which then extorts money from you or pushes annoying advertising into the system. Defense is the best offense. Do you know who can protect the system better than antivirus? You! See: when downloading an application from the Internet, the system checks it in the list of known malicious applications using the XProtect function.

ALSO READ: Did You Just Bought The Wrong MacBook???

This process goes on in the background unnoticed by a user, doesn’t require manual startup, and doesn’t affect the performance of the computer. And there is also an excellent Gatekeeper function. It prevents the application from running without the user’s permission if it doesn’t have an Apple digital signature, that is, it’s not marked as secure. The Mac security system can detect malware and flag them, shouting to you about possible malware. POSSIBLE. And it gets tricky at this point – as stated by Thomas Reed, director of the Malwarebytes Mac & Mobile division: “Adding a flag is not a mandatory measure, it is not always carried out. For example, in torrent programs, the flag is often NOT SHOWN, and it’s the software that is actively used by hackers.” If you carefully study each app before downloading it, then you won’t need it. The main vulnerability of any system – is you and me, ordinary people. Yes, it sounds obvious, but this is to prove that security doesn’t work 100%. Most often, a Gatekeeper warning appears if the application is marked as unsafe, and the user ignores the message, thereby inadvertently opening the door for viruses. Not to mention the bad habit of entering bank details and other personal data on unverified websites. DO NOT EVER DO THAT.

Did You Just Bought The Wrong MacBook???