Home Today at Apple Apple Dominates the top 10 global mobile phone sales, the only domestic brand on the list
Today at Apple

Apple Dominates the top 10 global mobile phone sales, the only domestic brand on the list

by Jessica Harris 10 months ago

Recently, the market research agency Counterpoint Research released the latest report on best-selling models. It is reported that this report summarizes the global best-selling models in January 2021, showing the new changes in the smartphone market.

As far as this ranking list is concerned, Apple’s iPhone 12 tops the list, followed by the iPhone 12 Pro Max and iPhone 12 Pro of the same series, ranking second and third, and the iPhone 11, also from the Apple brand, is also on this list. occupies fourth place 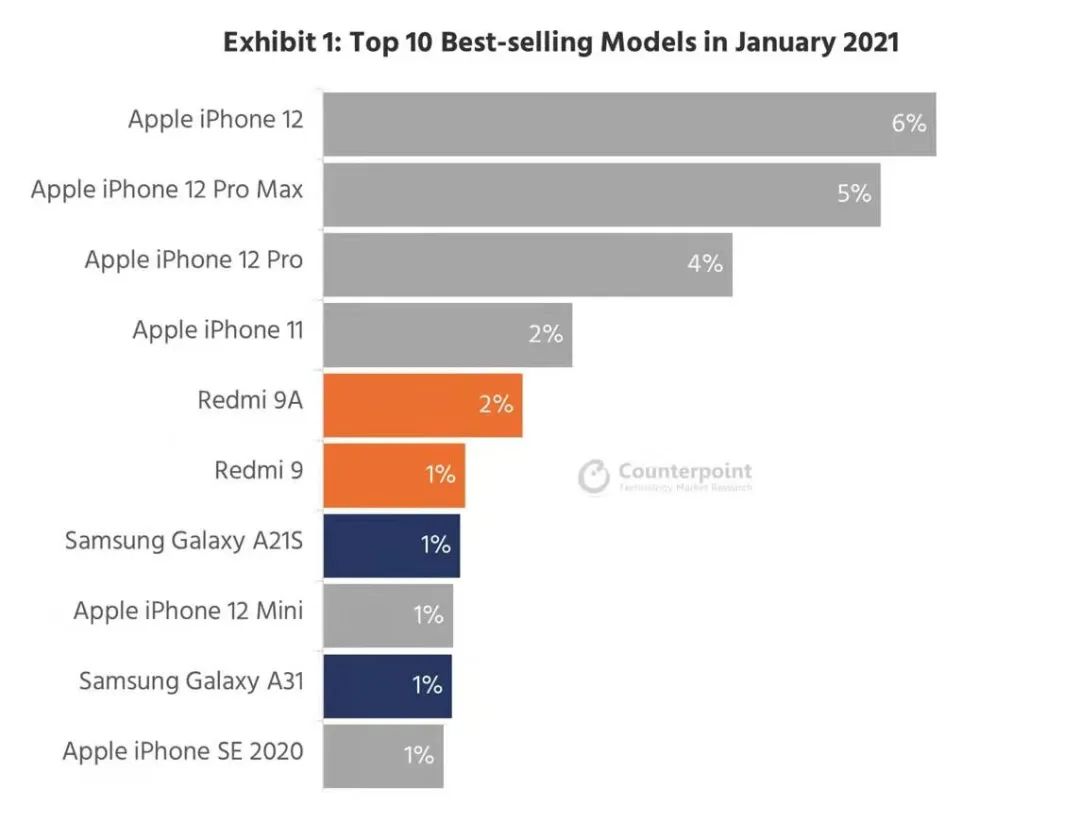 At the same time, Xiaomi’s Redmi 9A, Redmi 9 ranked sixth, Samsung’s Galaxy A21S ranked seventh, the iPhone 12 mini, which also belongs to the iPhone 12 series, ranked eighth, and Samsung’s other Galaxy ranked fifth in the list. The A31 ranks ninth, and the Apple iPhone SE 2020 ranks tenth.

Based on the information in the list, among the top ten devices, Apple’s products occupy six seats exclusively, accounting for six-tenths of the entire list.The related product report mentioned that the iPhone 12, iPhone 12 Pro Max and iPhone 12 Pro contributed 71% of Apple’s total sales that month. 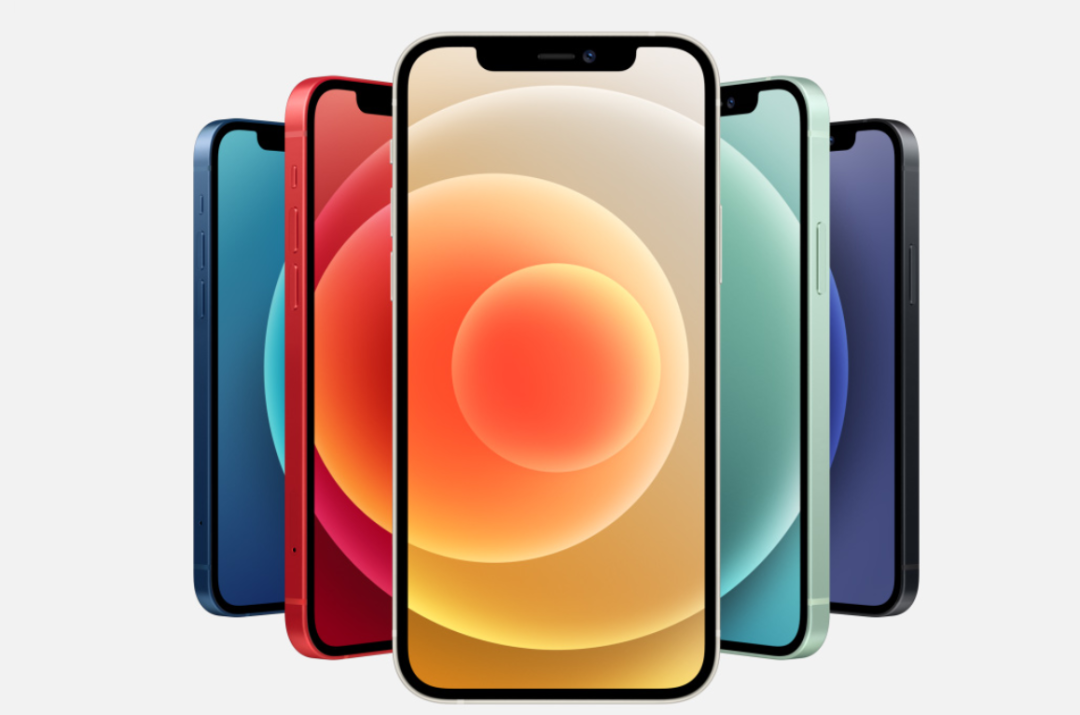 Among them, the iPhone 12 is equipped with a 6.1-inch super retina XDR display, equipped with an A14 bionic chip, supports multiple 5G frequency bands, brings a smart data mode, and has a rear 12-megapixel ultra-wide-angle and wide-angle lens.On the basis of supporting 5G, it brings an iterative upgrade of the overall device, and as a standard version product, it provides users with an option with suitable pricing and specifications. That’s why it became the world’s best-selling model in January 2021.

As entry-level products, Redmi 9A and Redmi 9 pay more attention to the improvement of battery life and performance.The report mentioned that the two smartphones accounted for 25% of Xiaomi’s total sales for the month. The reason why these two models are included in the list is also related to their low price and their own product cost performance. 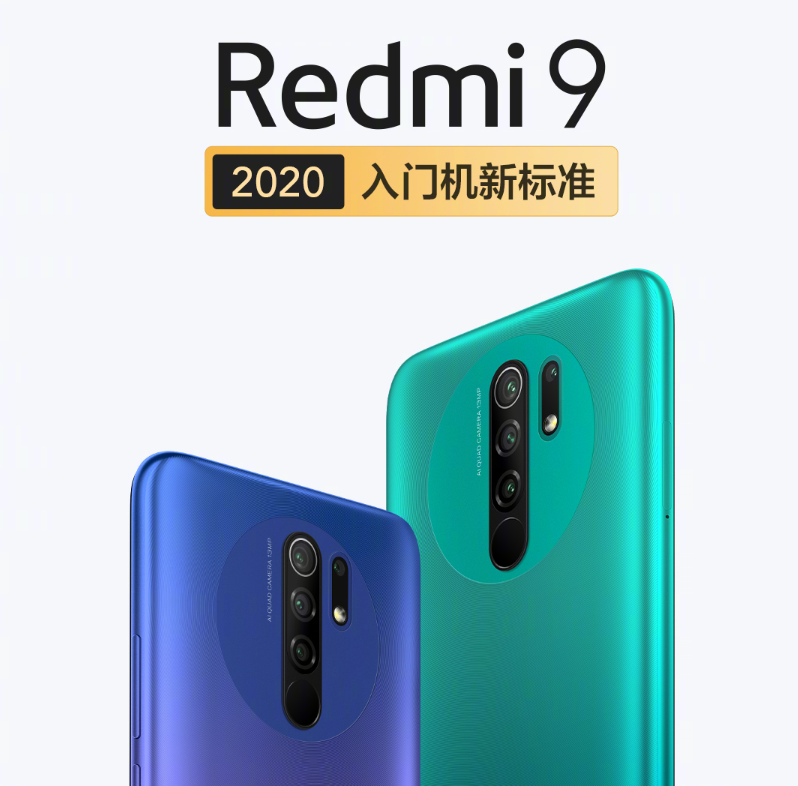 Samsung is another brand with models on the list, and its Galaxy A21S and Galaxy A31 have achieved good market sales.Unlike the flagship iPhone series and entry-level Redmi products mentioned above, Samsung’s products on the list are its mid-range A-series models. This gear has always had a large market demand and often brings good sales feedback to manufacturers.In addition, the iPhone 12 mini, which has been repeatedly exposed to general sales feedback, as well as the older iPhone 11 and iPhone SE 2020 also entered the list.As far as these products are listed, there is still demand for small-screen flagships and 4G models in the market, and these demands are larger than previous speculations.

When it comes to the old iPhone 11, it ranks first in the ranking of the top ten best-selling smartphones in the world in 2020 previously released by research agency Omdia.

In this list, the 2020 iPhone SE ranks second, iPhone 12 ranks third, Galaxy A51 ranks fourth, Galaxy A21s ranks fifth, Galaxy A01 ranks sixth, iPhone 12 Pro Max ranks seventh, The Galaxy A11 was eighth, the Redmi Note 9 Pro was ninth, and the iPhone 12 mini was in the top ten. 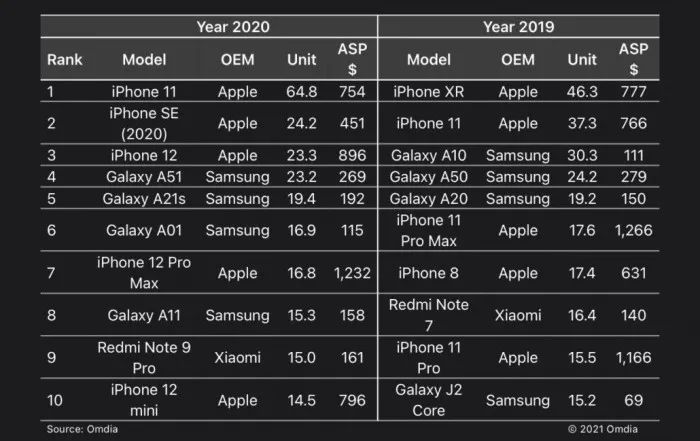 Comparing the two lists comprehensively, due to changes in user needs, the old iPhone 11 and iPhone SE 2020 have seen a decline in ranking, while the three models of the iPhone 12 series have undoubtedly rushed to the top three on the list, being The iPhone 12 mini, which has repeatedly questioned sales, has also risen in the rankings. This is mainly due to the pent-up demand for 5G upgrades within the iOS system, which has led to strong sales of the iPhone 12 series, and the release date of the new generation of iPhones is later than before, so that the strong demand for these models has continued into January.

In addition, the large number of iPhone models in the latest list has obviously squeezed the space for other brands to enter the list. However, Xiaomi’s list of models has changed from one to two. Based on this, it can also be seen more clearly that users have differences in product positioning choices.

Why Apple iPhone 13 Has a Diagonal Camera Layout?

Let’s learn : Why Doesn’t The iPad Have A Calculator?

Why does the iPhone have a high-quality speaker...

Why Apple iPhone 13 Has a Diagonal Camera...

Why Doesn’t The iPad Have A Calculator?

Why does the iPhone have water and dust...