You know how the 2017 Justice League movie pushed fans to sign an online petition to release the Snyder Cut, gaining over 180,000 authentic signatures and 4 years later Zack Snyder gave us a 4 hour 4:3 epicness that should’ve been the only Justice League from the get-go? This is how creative people felt once the latest generation of M1 MacBook Pro laptops was released. We all whined to Apple, and Tim Cook one day said “Good Morning” and gave us all – unmatched performance, ports, display, keyboard, battery, body…EVERYTHING.

To understand the appreciation of the masses, however, we have to go back in time to 2016. The new MacBook Pro combines the fundamental qualities of an ultra-portable device with uncompromising performance. Or so did Johny Ive say about the 2016 MacBook Pro. Little did he know that the Touchbar MacBook (as we call it) would become the most frowned upon modern laptop Apple has built. There was the butterfly keyboard gate, the “courage” elimination of ports, the removal of the Fn buttons to introduce an impractical touch bar, and of course, the legwarmer processors. The ONLY GOOD thing about the Touch Bar MacBooks was the speaker system on the 2019 16-inch facelift that remains unbeatable even by the latest Apple laptops to this day.

The previous generation of MacBooks is what makes us appreciate the newest M1 MacBook Pro unfathomably. That and Intel’s lethargic comfort zone over the last decade. The thicker design that efficiently cools the already cool M1, the return of the function row, the re-introduction of the ports, and the immense power of M1 make the latest laptops, and specifically the 16-inch MacBook Pro version, the gold standard for people that do more than just browsing. Of course, a fully functional keyboard alongside a few ports and an SD Card Reader is not what gives a laptop gold standard stature. Just like a cook’s recipe is not a chef’s recipe, thanks to just one specific ingredient, the combination of ingredients and the preparation process creates a Masterchef’s dish. The preparation process is something we just noted – the lackluster history of the last generation of MacBook Pros alongside the hot and furious Intel chips that came in them. It was a five-year marinating process that cooked to perfection the M1 line of laptops.

The M1 Max configuration that I choose for my laptop has been claimed an overkill by many reviewers out there, but I don’t see it that way. Suppose I were to use a car for my daily commute on twisty and bendy roads. In that case, I’d probably go for the sportier suspension, better tires, and more powerful engine…just for those specific maneuvering cases that may avert a crisis. It’s the same with the M1 Max. I have enough headroom not just to do my work but also to experiment, make mistakes, and innovate without being limited by the hardware. Let’s not forget that it’s more future-proofed.

I’ve worked on less powerful machines for years, which hasn’t stopped me from moving forward, but M1 Max’s power and specs push me quicker ahead, which is worth investing in a competitive world. I rarely see the beach ball of death. I spend less time waiting for something to happen, and for the first time, I use a computer that can match my workflow speed and bend to my will without breaking a sweat. I have only two regrets in terms of specs. The first regret is not getting the maxed out 64GB unified memory, and the second is not going for the more extensive 4TB internal storage configuration. As I said, I can live with both, but they would give me even less performance anxiety in the most difficult of renders and terms of future-proofing.

SIDENOTE: Had I had a smaller budget, I would still choose the 16-inch MacBook, but with the Pro chip and 32GB of memory and 1TB of storage. That would still propel me for the next 3 to 5 years. With the existence of the XDR display, I wouldn’t go 14 inches and lose on that gorgeous picture (more on that in a second). Ironically, as the latest MacBooks rock the most efficient and well-cooled SoCs, they have the more significant proportions that the old MacBooks were definitely in need of. Even more ironically and thankfully, no one is complaining. I dig the slightly chunkier body, and I love the new design trend of more muscular squared-off lines. The debossed logo on the bottom ads the ultimate personal message from Apple – saying there you go, my friend – you asked for it. The bigger, firmer, edgy rubber feet help the laptop stay firmly on any desk and project confidence in the future of this generation.

If there was one comeback and shoutout to the past that everyone would clap for, it would’ve been the glowing Apple logo, but that’s honestly too much of a stretch. What’s not a stretch but a leap forward is the XDR display that everyone was drooling while hoping to come to fruition, yet few believed it possible. The 256 pixels per inch, 1000 nits of sustained brightness, and ProMotion display threw me off to the point where I use the laptop exclusively without deeming any external display worthy of plugging into. The only other monitor that I can afford that can match this beauty is the 12.9-inch M1 iPad Pro which (not accidentally) turns into the ultimate companion to the 16-inch MacBook Pro.

You can check out my Portable Desk Setup video to see how you can use these devices to achieve the ultimate on-the-go productivity flex Even at max brightness and at full throttle, the MacBook Pro lasts an eternity. 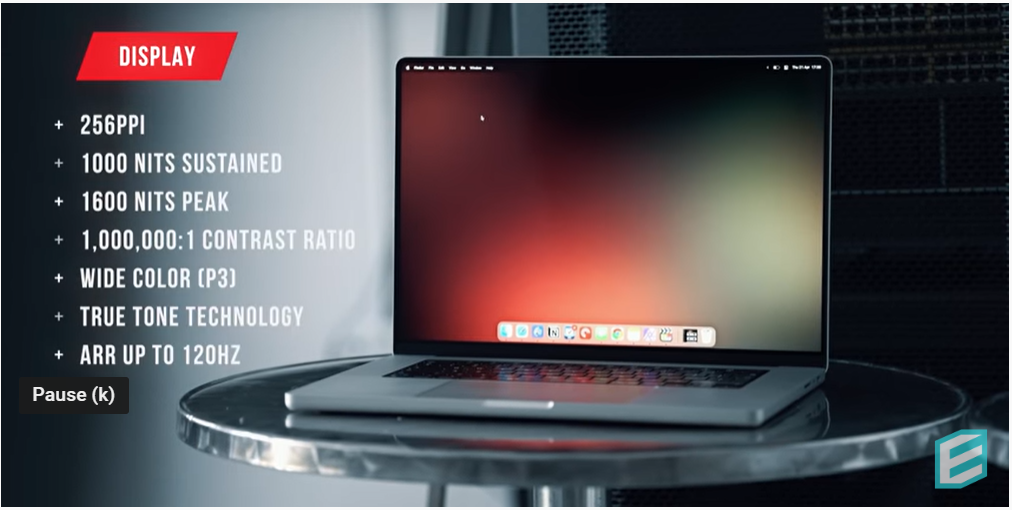 Rated at 21 hours of video playback, the 16-inch version indeed lasts less when stressed out. What’s admirable here, however, is that I don’t lose performance when unplugged. I can start and finish an entire project, no matter the complexity, and do even more if I am intentionally cautious. It is the highlander of power and battery life. A few months later, I still enjoy my forgetfulness to charge it. I’ve even hidden my battery indicator in bartender because I honestly don’t need to look at it constantly. The return of MagSafe is, of course, more than welcome.

MagSafe was what wowed me when I purchased my very first Mac a long time ago. The flexibility of USB-C charging on both sides is more than worthwhile, yet I still prefer this third version of MagSafe when possible because the click is as satisfying as opening a bottle of wine. Talking about charging, I tend to keep the 140-watt Apple charger at the office because I carry a more versatile solution in my backpack. You might have seen it in my latest Everyday Carry video. It is the Ugreen Nexode 100w Charger.

It is a 4-in-1 charger that I can use to charge the 16-inch MacBook Pro as well as my iPad, iPhone, Apple Watch, and earbuds (pretty much all my gear). This Ugreen Charger has 3 USB-C ports and a USB-A port supplying up to 100W of power. It can charge my iPhone 13 mini to 60% in less than 30 minutes and my 16-inch MacBook Pro in 1.5 hours. With the latest GaN chipset, it’s 3X faster than the original iPhone charger, and I love the travel-friendly compact design most. Side by side with the 140-watt Apple charger, you can see the difference in size and the number of ports I am gaining with Ugreen. I carry no other charging solution in my backpack at this point, and I couldn’t be happier.

In 1996 it was the first mass-produced and purpose-designed electric vehicle that no one cared about. Of course, it wasn’t forced upon society like we were forced to buy dongles and dock ourselves into desk setups just so that we could use docking stations. It was ahead of its time, a showcase of what was to come. In a world where Apple is still using lightning to painfully transfer iPhone 13 Pro ProRes footage, it begs the question of the exclusive existence of USB-C ports on the previous generation of laptops. I don’t hold grudges and tend to forget the sour taste of the past as quickly as I can throw the excess dongles of 2016.

Just after a bad storm, I feel happy welcoming the sun into my life and being free to work and communicate between my devices no matter where I am. If I were to ask for more in terms of ports, it would be at least one USB-A, and it wouldn’t be a precedent. The just-released Studio Macs each have 2 USB-A ports on the back. Why not leave one on the MacBook Pro? I guess I’ll keep a dongle in my life…just in case.

I was fortunate enough (meaning I killed myself working) to make some significant upgrades for my business over the last few months. The first impactful one was the camera that I use, and the second was this M1 Max. Many say gear doesn’t matter. That’s a lie! Of course, brushes don’t matter for the artistically challenged among us, but to those who paint and specifically those who are good at what they do, gear DOES MATTER…A LOT. I just witnessed that once I got delivery of the M1 Max. I’ve never been as quick at my turnarounds.

I’ve never been as free in the way I conduct my business. I am free to be creative, be inspired, and generate content, no matter where I am, and for that reason, I give the 16-inch MacBook Pro the Gold Standard Statue. And let’s be honest, the competition will have a hard time catching up in the next 2 to 5 years. This time I don’t mean to convince anyone to purchase the 16-inch M1 Max MacBook Pro. Although, people like my brother bought a base 16-inch model purely because of the gorgeous screen. This article is more of a love letter and appreciation for the fact that Apple listened and forged a Molnir that will strive for us to become the best at what we do.